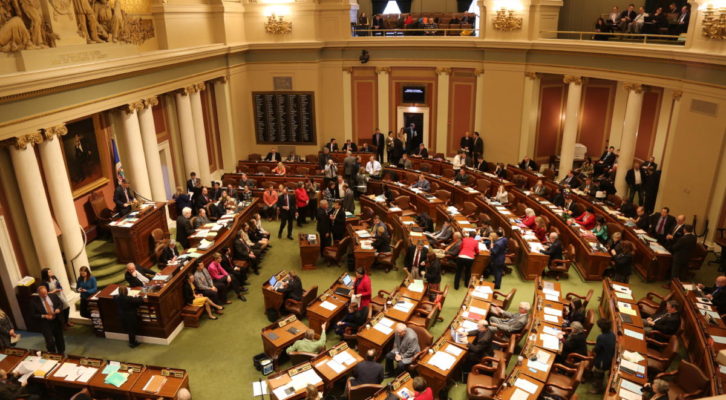 As is the case each session, our primary goal is to protect the industry from legislation negatively affecting home affordability. As we pass the first major legislative deadline, we remain on-schedule in defending the housing industry. Friday, March 10 marks the deadline in which committees must act favorably on bills in the house of origin in order for the bill to continue through the legislative process. We’re pleased to report that the numerous pieces of the Minnesota Homeownership Initiative have all met this deadline.

Job Opportunities in Construction: What is one of the biggest obstacles facing the housing industry? The lack of workers trained in the construction trades. Two bills, HF 1944 and HF 631 were introduced and heard in committees this week. BATC’s 2016 Legislator of the Year, Representative Jim Nash, introduced HF 1944 during a press conference Monday, that would encourage trades and vocational careers. BATC’s Executive Director David Siegel and BATC Members Pat Hegseth, Scherer Brothers; Tony Wiener, Cardinal Homes; and Missy Redman, T. Scherber Excavating joined the conference in support.

Townhouse Definition Referred to the Floor in Both Chambers: A long-time BATC priority, this initiative is a continuation of BATC v. DLI. HF 792 and SF 578, would modify the townhouse definition and remove the sprinkler mandate. Each has passed the appropriate committees and been introduced to their respective General Registers for discussion by the full body.

Rulemaking Review Oversight Heard in Both Chambers: On Wednesday, Siegel and Tom Wiener, Builder Vice President, Cardinal Homes, testified on behalf of a bill that would require legislative oversight for any proposed rule that would impact a homeowner by $1,000 or more. SF 745 and HF 1001 have each passed out of one committee and have been referred to their respective Jobs & Economic Growth Committee.

First-Time Homebuyer Savings Account to be Heard in the Senate: HF 1234 was heard in the House State Government Finance Committee on Tuesday. The Senate companion bill, SF 888, has been referred to the Senate Taxes Committee and is to be heard on Tuesday, March 14.

Manufactured Homes Title Transfer Moving Through Committees: HF 347 and SF187, bills that would modify manufactured homes titling process, are both moving through the committee process. HF 347 is scheduled to be heard in the Civil Law and Data Practices Committee on Tuesday.

As we hold committee and board meetings, attend functions and read industry literature, a clear challenge emerges for our members:...
© 2019 Housing First Minnesota Online. All Rights Reserved
Back to top