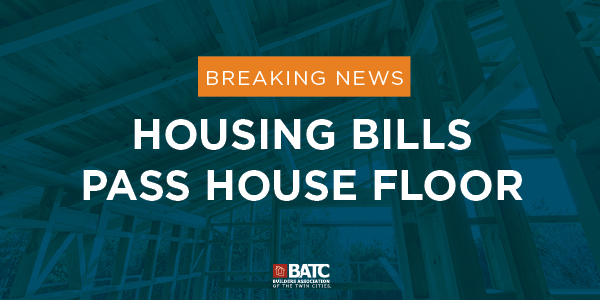 HF 1538 passed the Minnesota House with a bi-partisan vote of 108-23 on the House Floor on Thursday. The bill provides common sense changes aimed at decreasing the fast track to lawsuits that currently limit townhome and condo projects.

BATC has been the leading organization press for this bill, and the housing industry stepped up BIG time with over 1,000 emails sent to legislators over the past few days, urging their support for the bill. Your actions helped bring awareness to the issue – thanks to all who contacted their State Representative!

Our attention now turns to the Senate, where the companion bill awaits full action by the full body.

Also on Thursday, the Minnesota House concurred with the Senate language of HF 792. This bill is a technical fix, which will now head to the Governor’s desk. We anticipate that the Governor will sign this into law very soon.

This action provides a technical alignment of the definition of a townhome to three attached units or more, matching the national code definition. The impact of this on twin home projects is that sprinklers will not be required, reflecting the Minnesota Court’s directive in BATC v DLI, where Sprinkler mandates in one and two family homes was struck down.

BATC will continue to seek a permanent statutory solution to the sprinkler policy issue. Absent establishing an affirmative position in statute, the sprinkler debate will begin again in the next code debate. The next code development cycle starts in late 2017.

BATC thanks chief authors Representative Tama Theis and Senator Rich Draheim for their leadership on this issue.

The BATC advocacy team has been monitoring multiple conference committees as the two chambers iron out their differences. In addition to stand-alone bills, the following are included in various omnibus bills: rulemaking review oversight, public notice for housing moratorium, townhouse definition, and the first-time homebuyer saving account.

Legislative Update: Homeownership Initiative in the Mix as Deadline Nears 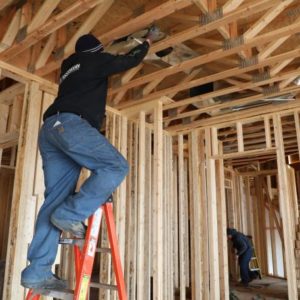 After five years of relatively flat permit numbers, Twin Cities residential construction is pacing for a year of serious...
© 2019 Housing First Minnesota Online. All Rights Reserved
Back to top