Sprinkler Issue: We’ve been here before, so what’s different this time? Beyond each legislative session having its own unique identity, this is the first run at final negotiations between Governor Dayton, Majority Leader Bakk and Speaker Daudt. Like previous sessions, our sprinkler issue has made it onto the Governor’s ‘no’ list of items that he refuses to accept. Simultaneously it’s received record bi-partisan support from the Bakk-led Senate and Daudt-led House. At the end of the day Dayton, Daudt, and Bakk will negotiate a global deal to finish the budget and close up the session. Conference Committees are revving up this week, BATC is watching both the Jobs and State Gov Finance Committees most closely. Both have our sprinkler language to consider.

Met Council: With four proposals floating in the process, ranging from a study of governance, to governance changes, to greater legislative oversight and authority over the Met Council activities – there’s a lot to watch for in the closing days of session. Given the Governor’s current authority to appoint the entire Met Council and carry out their planning and systems work without direct legislative oversight, the best bet for this session is the governance study.

Budget: With nearly $3 billion between the House (roughly $40B) and the Governor (roughly $43B) the main event for Capitol observers is the bottom line for our state’s 2-year budget. Once that overall number is established, the budget areas within (education, health & human services, environment) will receive their budget targets from which final agency budgets must conform. This will also give way to final policy negotiations on issues like the sprinkler mandate. 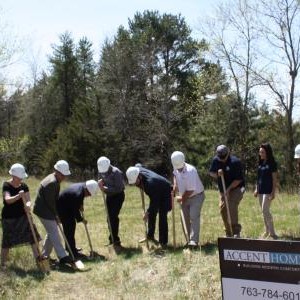 On May 4th, the BATC Foundation broke ground for its next project — a specially adapted home built in partnership with...
© 2019 Housing First Minnesota Online. All Rights Reserved
Back to top