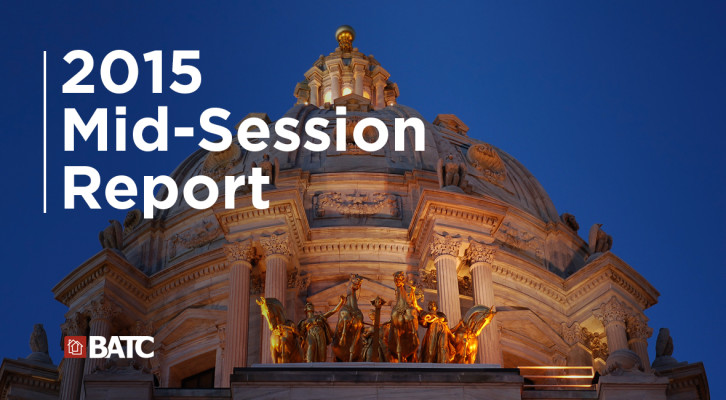 The Legislature is on its Easter/Passover break from Monday, March 30, 2015 until Tuesday, April 7, 2015, marking the unofficial mid-point of session. State lawmakers will then have just over six weeks remaining to wrap up their work on the budget and a host of policy measures which are still moving through the process.

For BATC and the homebuilding industry, it’s been a successful session thus far. We’ve stalled threatening proposals and are positioned for debates on the sprinkler mandate and energy code performance path. Beyond those two issues, there are several related industry items under discussion as the legislature begins its final push towards adjournment.

Sprinkler Repeal Discussions Continue at the Capitol while we wait for our Day in Court – BATC has continued to work with key stakeholders and a bi-partisan group of legislators to repeal the sprinkler mandate. It is expected that this will continue as legislators advance this issue for further discussion when session reconvenes.

Energy Performance Path – Pathway to Some Energy Code Relief? – In on-going discussions with DLI & key stakeholders we are analyzing the possibility of building a performance pathway where BATC members’ use of the HERS Index could be the primary energy code compliance measure and allow for some flexibility and trade-off in wall and attic insulation requirements. BATC has introduced a bill to require DLI to create this performance path, but it is possible that the authority already exists in the code, though it needs greater specification and modeling.

Met Council Governance – Staggered Terms & New Nomination Process Proposed –A bill has reached the House floor which would create staggered terms and would require that all Governor Appointees be city council members within a given Met Council District. The bill would also create a nominating committee made up of three Governor-appointed members, three appointed by Metro Cities, and one appointed by the Association of Metropolitan Counties. With the governance items included in this effort, the question will lie squarely with the Senate who has had minimal activity regarding governance or policy changes to the Met Council.

Code Technical – Establish 6-Year Code Cycle & Create More Implementation Time – BAM has been working to clarify a permanent six-year code cycle and an extended implementation period when a new code is adopted (9 months). The bill has passed the House and will be part of end-of-session discussions.

Safe Routes to School – Need to Define Safe Route Infrastructure – This initiative would require that any city applying for a safe-schools grant have a new development requirement for safe routes to schools established. This doesn’t give new authority to local governments, but it does single-out new development and is silent on the definition of what ‘safe routes to school infrastructure’ means.

Street Improvement Fees – New Fee for Streets Stalled on the Roadside:  This annual proposal to authorize cities to create special taxing districts to fund street improvements is running on low oxygen.  While BATC remains in a watchful role given the special carve-out we negotiated, a large coalition of private and non-profit entities are opposing the bill; it may not even make it out of committee in the Senate.  It will not be part of any House tax bill.  Prospects for passage are low.

CIC Lawsuit Reform – More Time Needed to Craft Fix for Multi-Family Lawsuit Issue – Our coalition work with the City of Minneapolis is on-going. The goal is to advance lawsuit reform which would encourage greater for-sale multi-family investments by developers within cities like Minneapolis. For BATC, this is also an opportunity to address CIC/Warranty Law weaknesses as well as to elevate the expansion of Notice and Opportunity to Repair provisions to all legal remedies, whereas today the communication requirements are limited to 327A legal actions.

Moratoria – Public Notice Provision Sought – With committee deadlines upon us and resistance from local government and environmental groups, BATCs bill to require a notice and public hearing prior to a moratorium will likely be continued into the next legislative session. Strong support exists in the House, but more discussion is needed to gather support in the Senate.

Park Fee Districts – More Park Fees?: This initiative would create a new revenue generator for local governments to build out park systems. Local property tax payers would fund these park expenditures. BATC opposes the additional park costs given the substantial contributions of new home development via the park dedication fee paid throughout BATC territory. As introduced, there is no protection or exemption for parcels which have paid park dedication fees.

Workforce Housing Initiatives – Advancing Affordability Need & Message – A host of bills have been floated to create grant opportunities, TIF districts, and other funding mechanisms to incent workforce housing opportunities in several greater MN regional centers. This has provided incremental opportunities to promote messages of greater housing affordability for all.

Substantial Economic Impact Rulemaking – This bill would create greater legislative oversight for rules processes (ie: building and energy codes) that create substantial economic impact. Expect this to struggle in an attempt be an end-of-session issue.

Transportation Plan – The House GOP released a $7 billion, 10-year transportation package that invested in roads and bridges within existing sources of revenue and no new taxes or other revenue. It calls for the creation of a new $3 billion “Transportation Stability Fund” with current sources of revenue (taxes on auto parts, rental vehicles, car leasing, etc.) as well as $2.25 billion in bonding, $1.2 billion from “MnDOT resource realignment, and $228 million in one-time general fund money.

Governor Dayton and Senate DFL leadership have proposed an $11 billion, 10-year plan that includes an increase in the wholesale gas tax, the metro area sales tax, and license tab fees.

Budget Targets – The House GOP also released their budget targets and proposed a $39.949 billion budget for fiscal years 2016-17. This is a 1.7 percent increase in spending over the 2014-15 biennium, but a reduction in spending called for by current law. The budget plan is achieved by calling for approximately $2 billion in tax relief, a $1.1 billion reduction in health and human services spending, as well as spending cuts in other areas, including, jobs, economic development, state government finance, and environmental programs.

Governor Dayton’s is proposing a $43 billion budget that spends most of the state’s $1.9 billion budget surplus with only approximately $200 million in tax cuts.

The Senate DFL released their targets shortly after the House, positioning it between $43 billion budget and the House Republican $39.9 billion budget with a $42.7 billion budget of their own. Their plan calls for approximately $1.14 billion in new spending out of the projected $1.87 billion budget surplus and dedicates about half of that towards education. The Senate plan also calls for $200 million in tax cuts, likely targeted towards property tax relief, and would set also aside $250 million into the state’s budget reserve. 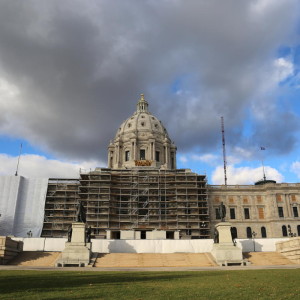 Week 12 was a week of hurried policy measures racing against the clock, but it was also a week of unveiling. The House GOP released...
© 2019 Housing First Minnesota Online. All Rights Reserved
Back to top