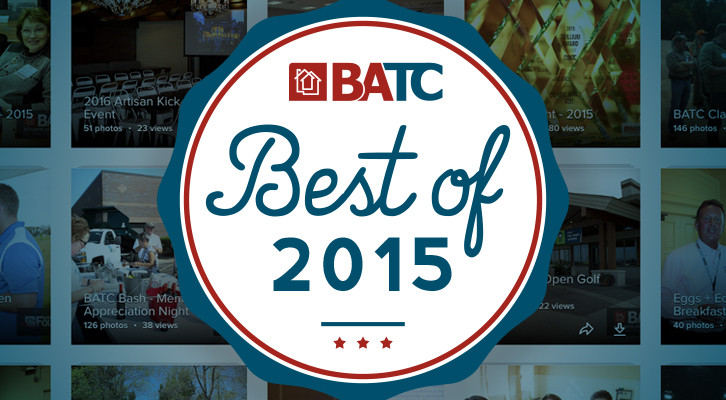 Wow, looking back it’s safe to say BATC had an amazing 2015! While a major court decision that declared the sprinkler mandate invalid stands out as a huge highlight, there are many more accomplishments that we should all be proud of this year. Here are BATC’s Best of 2015!

Powerful Changes to NorthstarMLS – BATC has partnered with the Northstar MLS to achieve our shared goal of creating more new home activity on the MLS. We were able to add several fields that are tailored to new construction. This partnership advances our industry and will help with the appraisal challenges facing all of us.

Build out of the Home Builders Advocate Network – We are in the final build-out phase of our advocate network, which will tie together all of our advocacy work. This network will connect all of the influencers in our industry with political decision makers at all levels. By having a formal network to share information on a two-way street, we’re confident that we will be able to engage at the legislature, in cities, and in political elections.

Two National Awards – BATC was honored with two national awards in 2015. Our Executive Director, David Siegel was recognized by the National Association of Home Builders (NAHB) as this year’s Executive Officer of the Year. This award recognized Siegel’s commitment to BATC and NAHB. He was chosen for this honor out of the more than 300 HBA executives across the country. BATC was selected by Meeting Professionals International (MPI) to receive this year’s RISE Award for Organizational Achievement. BATC was specifically recognized for its use of meetings and events to support its five key goals.

“I think it says a lot about what we are doing as an association when two national organizations recognize our leadership and association as a whole, it tells us that we are going a above and beyond and we should be proud.”—Chris Contreras 2015 BATC President

BATC Foundation Completed Three Major Projects – The BATC Foundation completed a new adaptive home for Army SPC Marco Solt, an addition and remodel for Bluebird House by Homeward Bound that houses four young men with special needs, and a basement remodel for former Surgical R.N., Karen who has extreme sensitivity to light. Homes for our Troops, which partnered with the BATC Foundation on the home for Marco Solt, said that our BATC members’ generous donations were the most they have ever seen for one of their projects. The BATC Foundation was able to increase their visibility and charitable work through each project.

Grew Social Media & Communications – We continued to push for better outreach and communications in 2015. We doubled our press coverage for the Parade of Homes tours and increased our coverage of BATC events and issues. We grew our Parade of Homes Facebook page to nearly 17,000 likes and expanded our social networks to include Instagram. We also, created four new electronic newsletters to share updates on the Artisan Home Tour, MN Green Path, Housing First, and a weekly recap newsletter from our blog.

Grew Housing First – Housing First has continued to grow in 2015 and is now a top-tier political organization within the business community. In fact, we’ve met with House Speaker Daudt and other House leadership four times in the last five weeks, as well as meeting with Senate leadership. We anticipate a Housing First budget of $1.2 million for the 2016 elections where we will continue to identify and support Housing Champions from both parties. We are also positioning ourselves to impact the 2018 governor’s race. In the long-term Housing First will position us for success on all policy fronts.

Energy Performance Path Created – During the 2015 legislative session, BATC introduced legislation that led to an agreement between BATC and DLI to work together to create and promote an energy performance path. The benefit of the performance path lies in the software modeling of homes using the new energy code requirements. If a builder can demonstrate the adequate energy savings performance in the new code, certain requirement ‘trade-offs’ can be utilized. BATC has been working diligently to create the performance path, which should be completed by early 2016.

New and Newly Remodeled Ads – We launched a “new and newly remodeled homes are better” TV campaign during 2015 to help consumers think about the benefits of buying a new home or remodeling their current home. Look for this campaign to be fine-tuned and grow during 2016.

Grew Digital Campaigns – Our efforts to touch consumers are undergoing some major changes.  As the public is moving more of their lives online while expecting brands to be open to one-on-one communications, our promotion is moving in the same direction.  While recognizing that our tour events must continue a strong mass-media push, we’re also adding in more highly targeted digital delivery options for all our messages. Add in our strong and growing social media presence, and we’re effectively ensuring our brand remain relevant to the way families are shopping and buying today and into the future.

Bigger BIG Night – Following the success of the first ever BIG Night in 2014, we continued to work to make it an even bigger night in 2015! We moved the event to the Mystic Lake Showroom and saw attendance climb. We also created two new awards the “Rising Star Award” and the “Green Path Leadership Award.” We plan to make next year’s event even better!

Artisan Home Tour Grows – With the successful launch of our first Artisan Home Tour under our belts, our second tour was even better. We enhanced our marketing profile, gained unmatched news coverage, and added several new partners, including retail ticket sales at Bachman’s and Patina. We’re working on some new ideas for 2016 now, so expect an even better third-year tour. This new niche for BATC assures regional residents that we are their very best resource for new homes — whether buying at any price point, or seeking information and inspiration about everything home. 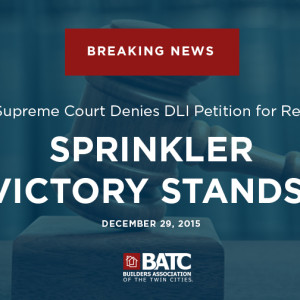 This morning we received great news from the Minnesota Supreme Court. It denied the Minnesota Department of Labor and Industry's...
© 2019 Housing First Minnesota Online. All Rights Reserved
Back to top