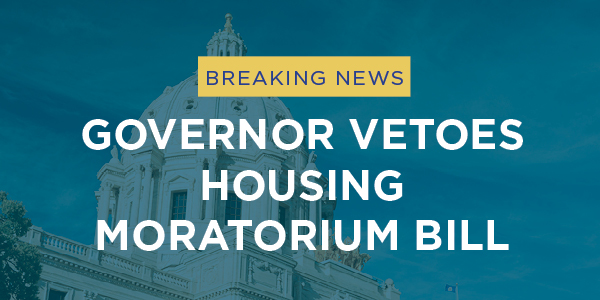 In his veto letter, Governor Dayton stated: “This legislation represents a step forward in providing notice and a voice for those potentially affected by an interim ordinance regulating a housing proposal. However, the requirement for a two-thirds vote of the City Council members present and voting on an interim ordinance related to housing proposals is an unnecessary exception to the general requirement for a majority vote. The provision weakens local control and the rights of local community members.

Should a subsequent bill provide for a majority vote instead of two-thirds, I would reconsider this legislation.”

HF 330 has been a multi-year effort to bring a basic element of fairness for property owners facing a housing moratorium. BATC worked closely with a bipartisan group of legislators and achieved compromise language with the League of Minnesota cities that would balance homeowners rights and the need for transparency within a cities’ process to enact a housing moratorium.

BATC will continue to work with legislative leaders and the Governor to try to find common ground on this issue in the closing days of the legislative session.

On Friday, the Minnesota House of Representatives voted 73-48 to pass HF 1001. This bill would provide a legislative mechanism...
© 2019 Housing First Minnesota Online. All Rights Reserved
Back to top