Just days remain in the 2016 election season. “Thank goodness!” many of us are declaring.

For nearly 20 months (that’s right almost two years) we’ve been following the politics at the top of the ticket. Through the announcements, the primaries, and the general election we have had non-stop coverage of the candidates running for President of the United States of America.

But, this is only ONE of the ovals you have an opportunity to fill in this year. That’s why the Housing First Fund has launched the final phase of the 2016 campaign, “Vote Local.”

Your vote for your local legislators, city council persons, county supervisors, and school districts is extremely influential in your day-to-day life. Of course your vote for those that go to Washington, D.C. is important, but your vote at the local level has an even bigger impact on your neighborhoods, community and the state!

We encourage you to evaluate the candidates and vote early or on November 8th! Not sure where to vote? Click here. 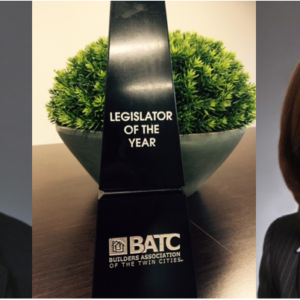 The Builders Association of the Twin Cities is honored to name Representative Jim Nash (R-Waconia) and Senator Melisa Franzen...
© 2019 Housing First Minnesota Online. All Rights Reserved
Back to top