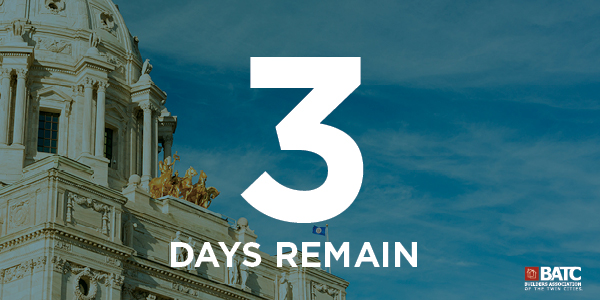 The 2017 Minnesota Legislative Session has just hours remaining before their constitutionally mandated adjournment. BATC advocacy staff is working around the clock to advance numerous housing bills before midnight on Monday.

What to expect?
Legislative leadership and Governor Dayton have been meeting all week to try to iron out budget deals. Slowly, but surely progress is being made.

As for the many pieces of the Minnesota Homeownership Initiative, we are expecting further discussion and action as we approach the finish line.

First-Time Homebuyer Savings Account: An incentive for Minnesotans to save more of their own money to help achieve the dream of owning a home. This provision was included in the omnibus tax bill HF4. Governor Dayton vetoed the bill. The legislature is expected to send a new omnibus tax bill to the Governor by Monday.

Public Notice for Housing Moratorium: On May, 15 Governor Dayton vetoed HF 330, a common-sense bipartisan housing bill that would have ensured property owners are given fair notice and a public hearing prior to the imposition of a housing moratorium. The bill also would have required a 2/3 vote of the city council for a housing moratorium, aligning it with the voting requirements for other major land use decisions. This language was also included in the Jobs and Economic Growth Omnibus Bill that was vetoed by Governor Dayton. It is expected to be adjusted in the newest version.

Removing Barriers to Developing Owner-Occupied Condos/Townhomes: On Thursday, HF 1538 passed the Minnesota Senate with a bi-partisan vote of 61-3. The bill provides common-sense changes aimed at increasing the available inventory of multi-family housing, which serve as an onramp to homeownership for many Minnesota families. The bill has a number of differences when compared to the version which passed the House of Representatives with a strong 108 bipartisan votes. These differences will likely be reconciled in a conference committee as the legislature moves towards its Monday night adjournment deadline.

Rulemaking Review Oversight: HF 1001 (Vogel)/SF 745 (Kiffmeyer) would allow for the legislative committee with jurisdiction to review rulemaking proposals which would impact an individual homeowner costs to purchase or remodel a home by $1,000 or more. As a stand-alone bill, this legislation has passed the Minnesota House of Representatives 73-48. It was also included in the Jobs and Economic Growth Omnibus Bill that was vetoed by Governor Dayton.

Twin Home Sprinkler Fix, Continuation of BATC v DLI– On Tuesday, May 2, Governor Dayton signed the housing industry’s bill removing the sprinkler mandate from twin homes, which directs the Department of Labor and Industry (DLI) to immediately modify Minnesota’s Building Code to remove the costly sprinkler mandate from twin homes. As part of the new law, DLI must enter into expedited rulemaking to modify Minnesota Rule Part 1309.0313 to state sprinklers are not required in single family or twin homes, unless otherwise required by law.

BATC Wins Award for Housing Day at the Capitol 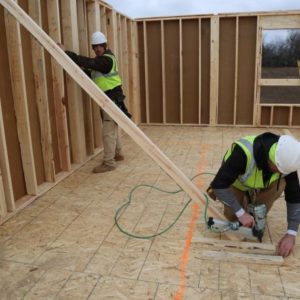 Minnesota saw the highest monthly job gains in April since 2013. According to the Minnesota Department of Employment and Economic...
© 2019 Housing First Minnesota Online. All Rights Reserved
Back to top