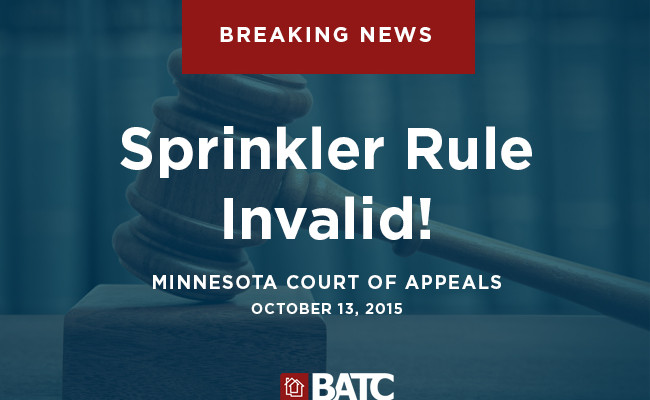 The MN Court of Appeals released its decision Tuesday in the Builders Association of the Twin Cities (BATC) v. Department of Labor and Industry (DLI) case regarding the appropriateness of the sprinkler mandate. The court ruled, “DLI failed to establish a record supporting the 4,500 sq. ft. threshold for sprinklers as required by Minnesota law invalidating the sprinkler mandate.”

“We are mindful today that we are declaring a rule adopted by an administrative agency of the state invalid. We do not do so lightly, but rather thoughtfully and unanimously. Nevertheless, we are bound to apply the law.” – MN Court of Appeals

BATC filed a petition to the Minnesota Court of Appeals earlier this year to argue that the sprinkler rule and energy code exceed the rulemaking authority granted under Minnesota law.

“Safety is the highest priority of Minnesota builders, and we are proud that new homes in Minnesota are among the safest in the nation. The sprinkler mandate would not have changed that safety record, but it would have made homes more expensive for Minnesota families. The Court’s decision to invalidate the sprinkler rule confirms what the public, legislature, and code experts have overwhelmingly stated all along, the sprinkler mandate is arbitrary and not supported.” – David Siegel, BATC Executive Director

Special thanks!
We want to thank BATC’s Board of Directors for their leadership and perseverance in pressing forward on this issue. To our members who wrote emails, talked to legislators, contributed to Housing First and supported BATC’s efforts in ways big and small, THANK YOU!

Finally, a special thanks to the Larkin Hoffman team who led this portion of the sprinkler mandate fight. Attorneys Peter Coyle, Rob Stefonowicz, and Bryan Huntington managed this complex and high-profile case with professionalism throughout.

It's Been Quite a Year 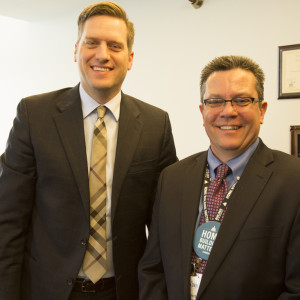 It's Been Quite a Year

One of our past presidents recently commented that we will look back five or 10 years from now and see 2015 as one of the most...
© 2019 Housing First Minnesota Online. All Rights Reserved
Back to top