Over a month past the end of regular session, the legislature and governor are finally wrapping up the passage and signing of the state budget bills, including the housing omnibus bill.

Since they gaveled in on January 5, your Housing First Minnesota advocacy team has been working around the clock with legislators and staff to advance the dream of homeownership for more Minnesotans.

Halting the Expansion of Street and Park Impact Fees. Local government interest groups looked to the legislature in hopes of legalizing the infrastructure fees that were ruled illegal in the Supreme Court case Woodbury v. Harstad. After a robust discussion and strong pushback from Housing First Minnesota and other housing groups in multiple committees, this was not included in the final budget deal. Additionally, cities of the first class sought changes in the way park dedication fees are calculated. While the House took an interest in advancing this, the Senate did not concur and the bill did not survive in the final budget deal.

Rollback of Costly Window Fall Prevention Device. A provision that has the potential to save hundreds of dollars per home is expected to be signed into law once Governor Walz signs the housing omnibus bill. This updated language states that: window fall protection devices are not required in one and two-family dwellings if: the lowest part of an operating window is 24 inches above the finished floor – OR – the lowest part of the opening of an operable window is located 72 inches above the exterior grade below.

Advanced Zoning and Land Use Reform Throughout Session. In both committee hearings and on the floors of both chambers, there were robust discussions about the necessary changes needed in the way we approve development projects in Minnesota. From PUD reform to aesthetic mandate bans, the discussion around exclusionary zoning practices is gaining traction the 2021 session marks the beginning of a critical discussion for housing in Minnesota. Look for further discussion and legislative proposals throughout the interim and into the 2022 session. 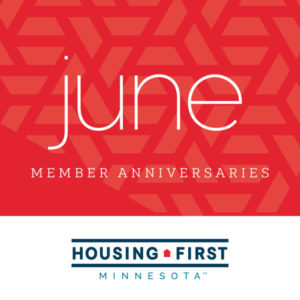 This June, we are celebrating nine member companies that have been a part of the association for 5, 10, or 40 years. Thank...
© 2019 Housing First Minnesota Online. All Rights Reserved
Back to top